Catching with the fleet

The repairs where finally done and i was ready to depart Pratchet's Disc towards Fine Ring Sector JH-V C2-4 and meet the fleet at Laika's Rest base camp. However just before i go i made a quick lookup on the Galaxy map and found a small planetary nebula which was not so far away but was not on my route. And off we go towards Spiral Planetary Nebula or KN Muscae which is the central star of the small planetary nebula.

The trip was fast and without any big surprises. I manage to found some undiscovered Water Worlds. One of them ringed and one of them orbiting a Brown Dwarf star. 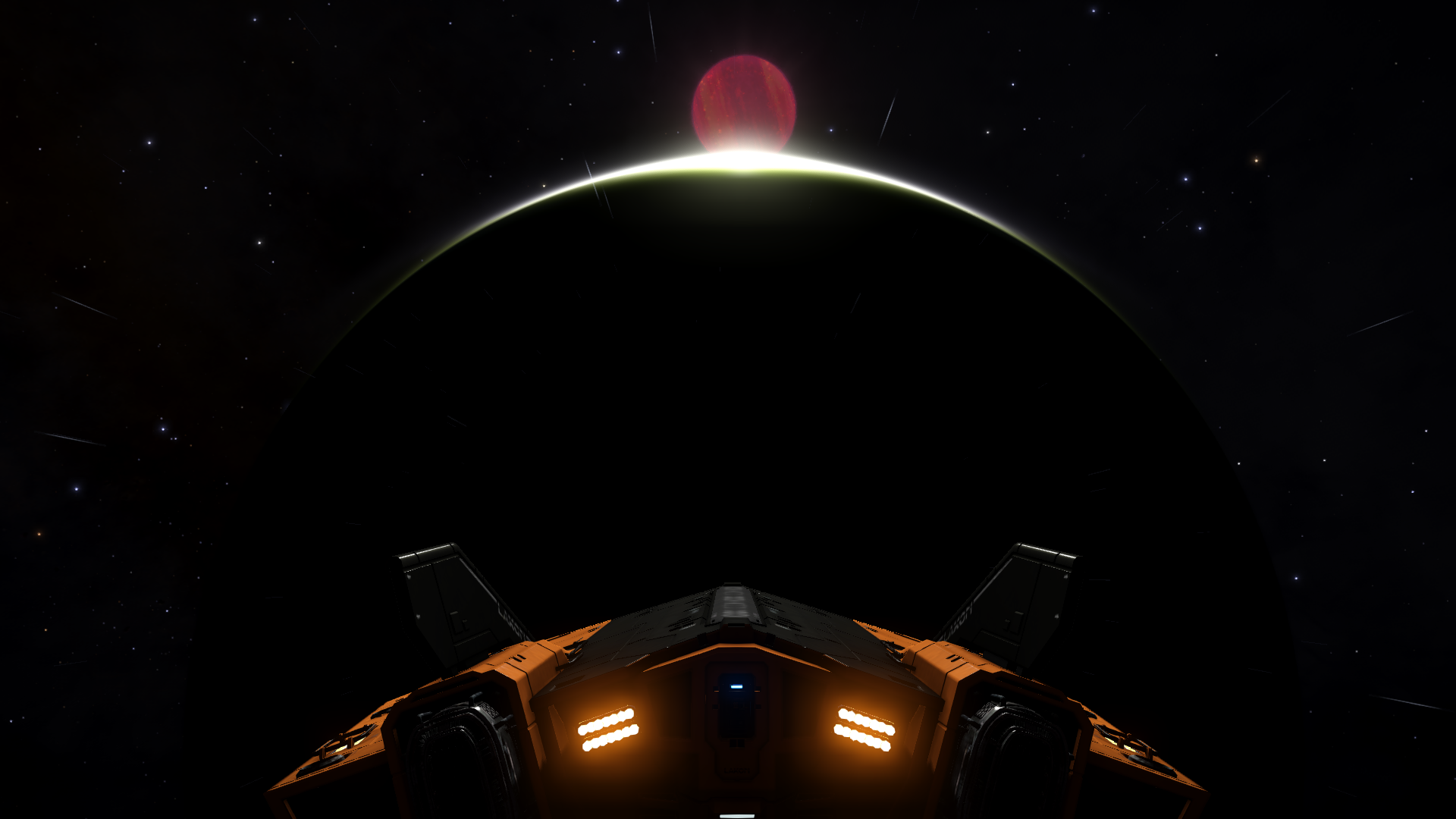 After some lonely flying time i got to KN Muscae. It was large Wolf-Rayet star in the center of the nebula. And after i did enough sight seeing i turned my ship towards Laika's Rest.
Hour later i was there landed. However i was a little late for the main fleet which already left for Lagoon Nebula.
Lucky for me there where still some pilots left at the camp so after i arrived there was someone to drink a cup of tea with. 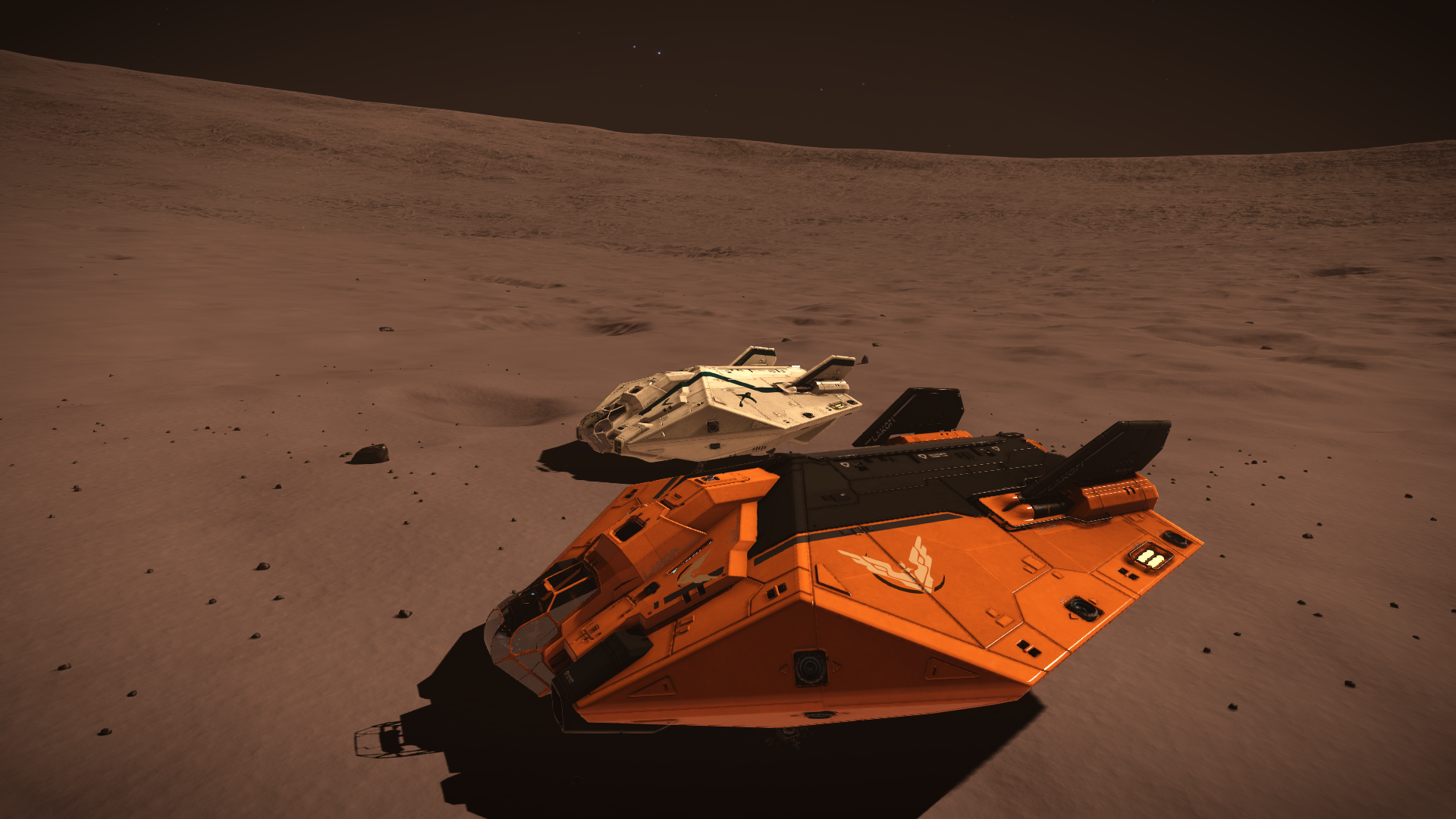 Once the tea was over everyone got back to their ship and departed. Here is the final look of Shapley 1 planetary nebula before i leaved this place. 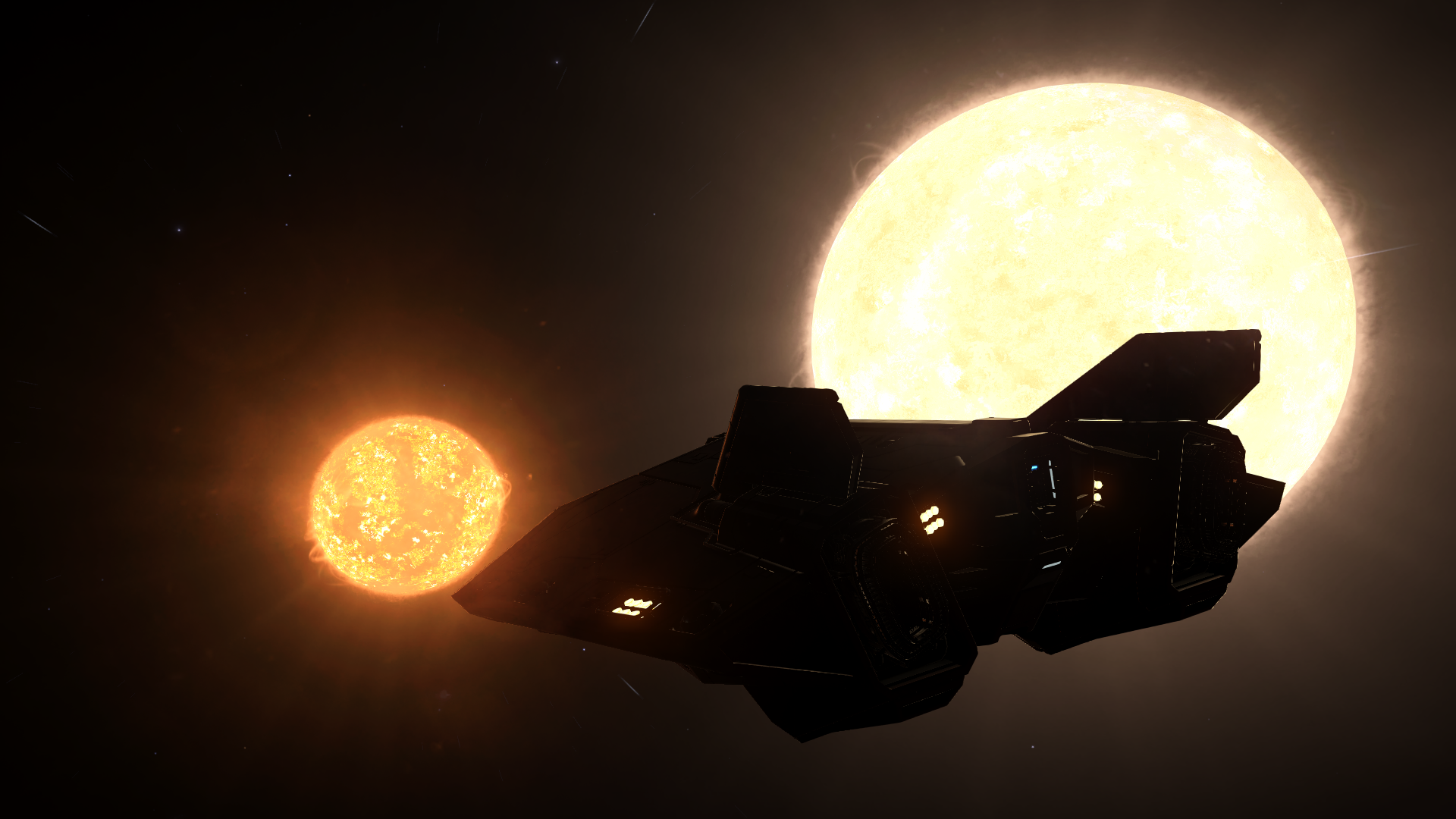 The system was only T Tauri stars but the second star was orbiting the main one in a close orbit. Not only that but my system entrance path was straight through the second star. This is some scary shit i'm telling you!
Most of the T Tauri stars are M/K class sized stars and thus making jumping into such system not a big deal, but i recently found a large T Tauri class star which was in size of a big A class. If the two stars in Praea Euq DW-E d11-121 where such stars i would have been cooked between them on my arrival.
The note to myself is - be more careful next time when you are jumping in systems which main star appears to be a close binary.

The rest of the trip was rather dull and boring. Found one beautiful Ammonia World in Praea Euq VB-Q b46-7. And lastly i arrived in HD 148937 system. The home of the landable planet with the highest gravity score known till now - 9.77G!!! My highest G landing was a planet with something like 2.88G, so i was in a dilemma should i try to land this one? Many have tried and not everyone had survived.

Then i was like - "What the hell! I am here now. I can do it!" and started approaching the planet. This was my most careful planetary approach and landing but after around 40 minutes the ISV "Sun Dog" landed successfully without any damage. 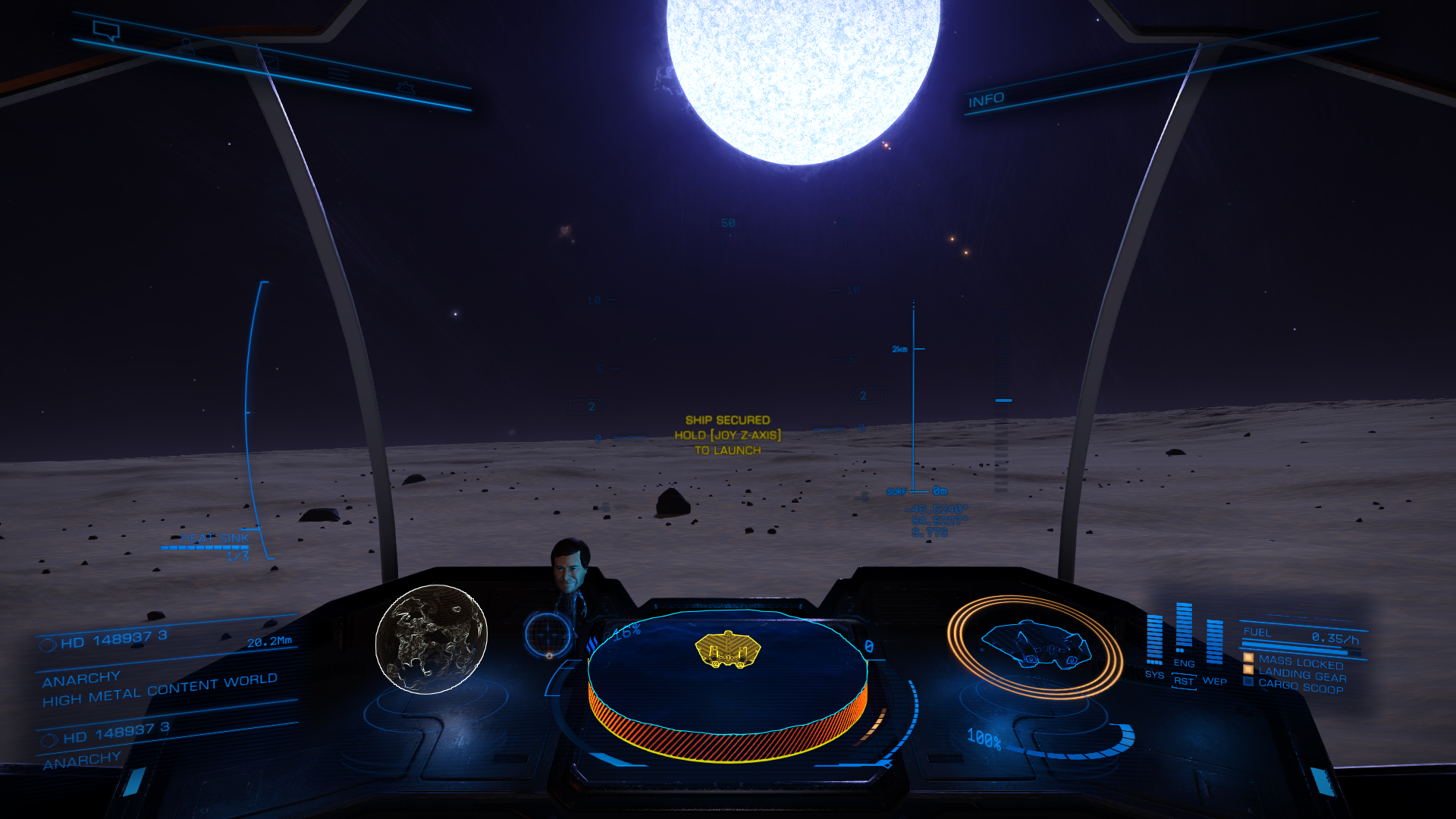 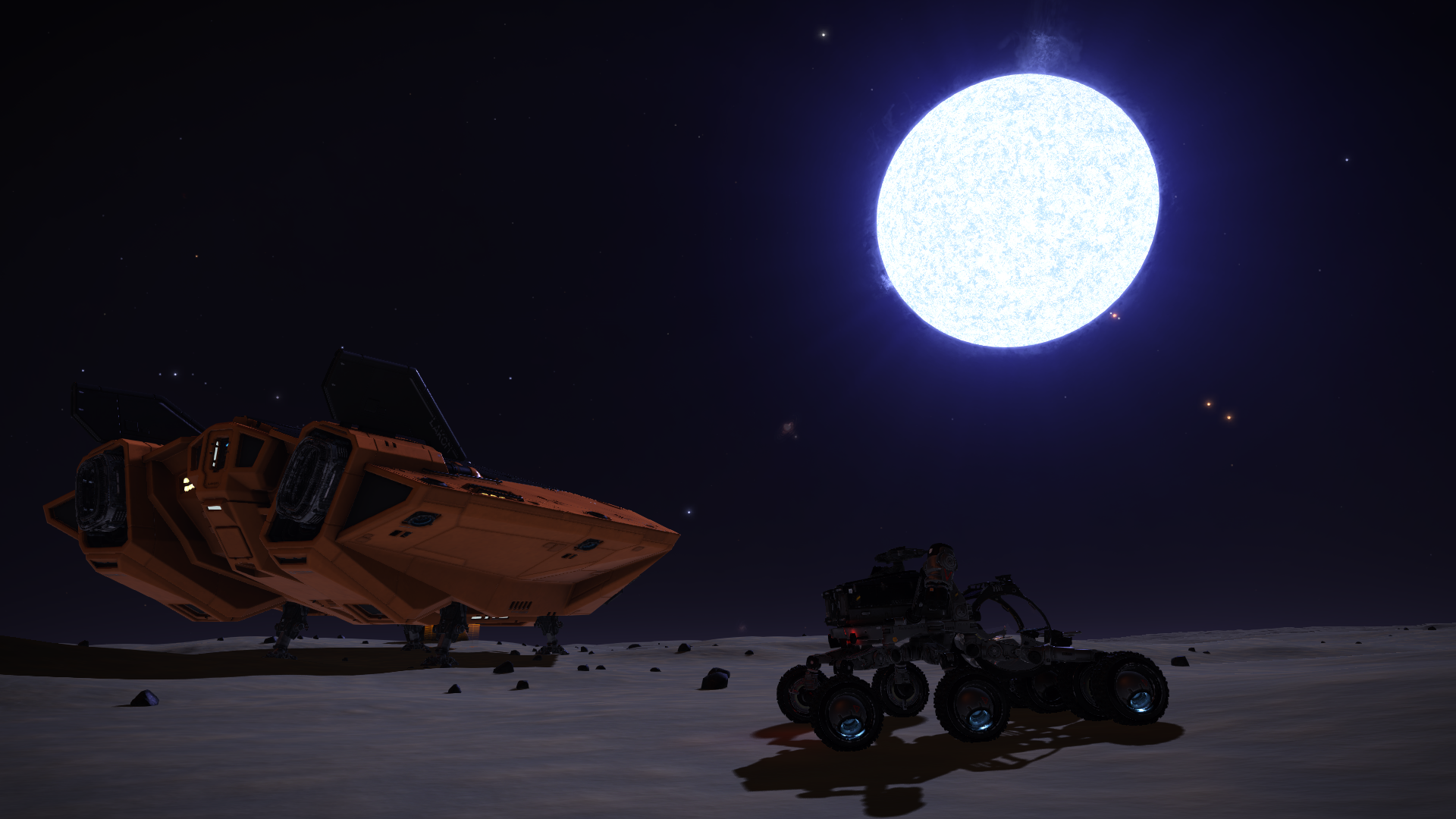 The whole planet was basked in the purple-bluish light of the giant O class star HD 148937. It was a very quiet and beautiful evening. I even opened a bottle of Lavian brandy, stayed in the canopy gazing outside and slowly sipping from the bottle (all my glasses are currently dirty as my washing machine broke, will fix it soon).

Stayed there for the night and when i woke up i found a different view - the giant O star was gone and smaller K class star was now illuminating the landscape. Decided that i will go for a drive before leaving. After few hours of driving and prospecting i did not find any useful materials, however i found the remains of some poor soul who crashed on the surface. 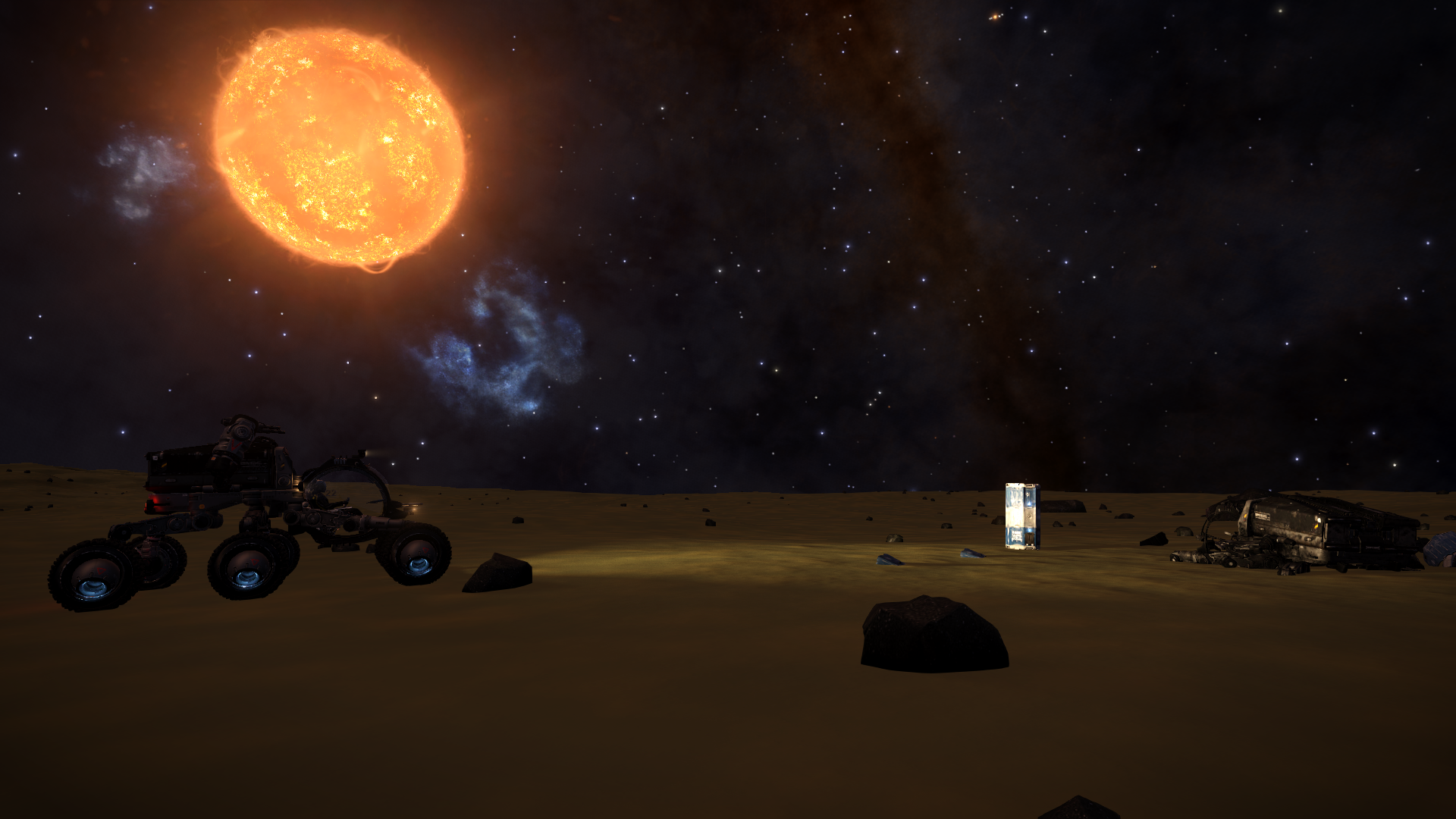 Then i returned back to the ship and prepared for my departure. Checked that all systems where working as expected, especially the engines as this will be a hard take off.
Started the engines and for a few second my hearth skipped few beats as my ship did not move at all, but then it slowly started ascending. Retracted the landing gear and continued to ascend vertically without pushing the main thrusters. After i gained few kilometers in altitude i stopped ascending, fired the main thrusters and pointed the ship a few degrees upwards for a slow ascend. It took several minutes to gain enough altitude in order to escape from the gravity well of the planet.
If i hadn't done the slow ascending my thrusters would have loosed the battle against the gravity of the planet and i would have found myself going towards the surface really fast.

Once i was away from the planet i plotted a course towards Lagoon Nebula and my first waypoint towards it was V970 Scorpii. 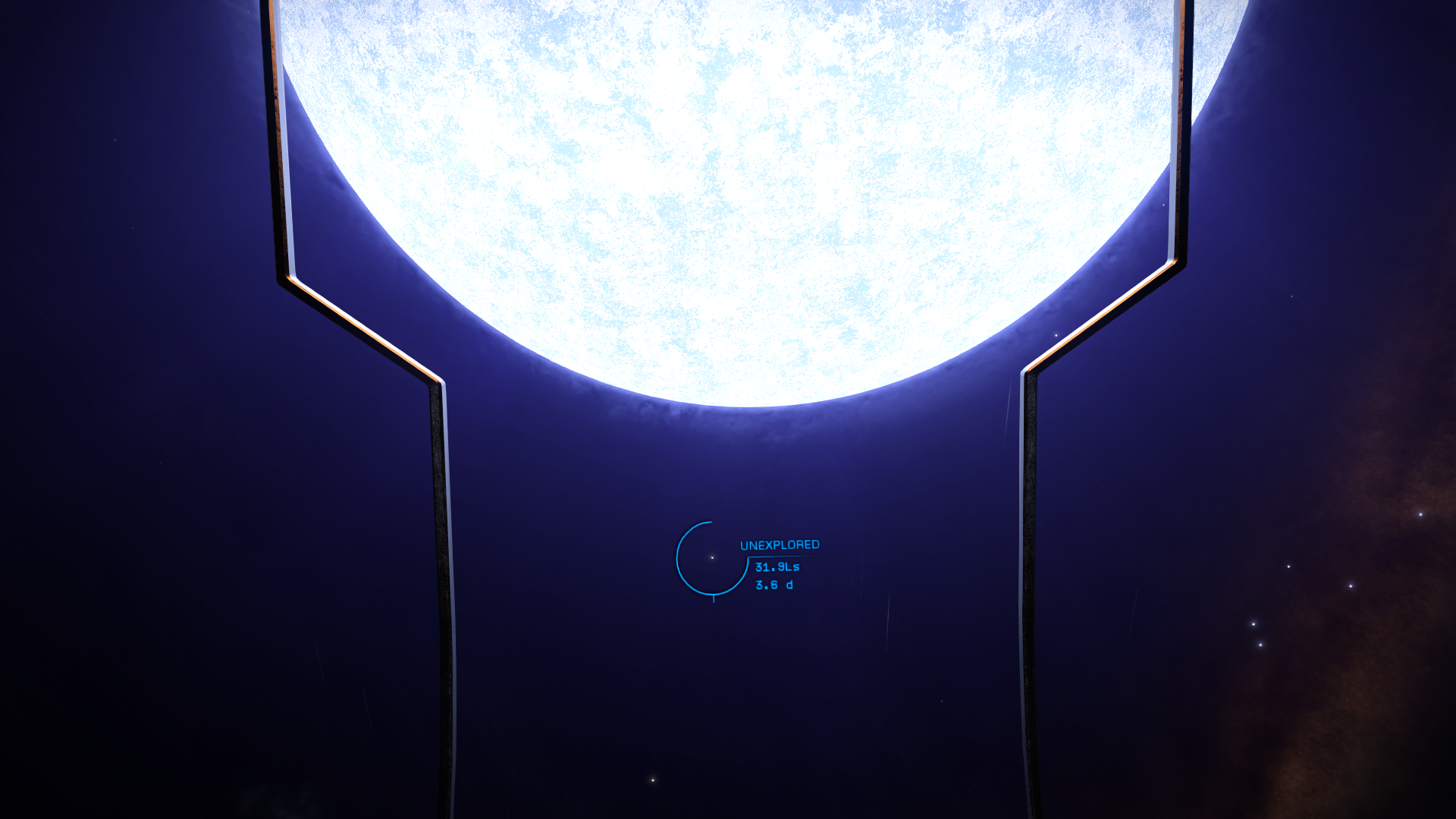 You can see the Neutron star in the vicinity of the main B class star. It was so close that you actually scoop fuel when you scan it. However i placed a danger mark in my notes about this system, because if you enter it from the wrong angle you may end up very near the Neutron star or maybe even crash in it.

After that i continued my journey and i hope that i will reach Tinné's Endevour soon and before everyone have departed.