And so, it has begun! The greatest expedition to the far side of the Galaxy. More than 800 ships are now slowly venturing to the core of the Galaxy with the intentions to go beyond.

After the big "Barnacles" blitz hunt was over and the departure date approaching i head to Pallaeni and got there few hours before the big event.
The base camp was crowded with people. I haven't seen so many Commanders in my entire pilot career!
There was celebration, SRV stunts and some Commanders did some fine dancing with their ships until the departing hour slowly arrived. 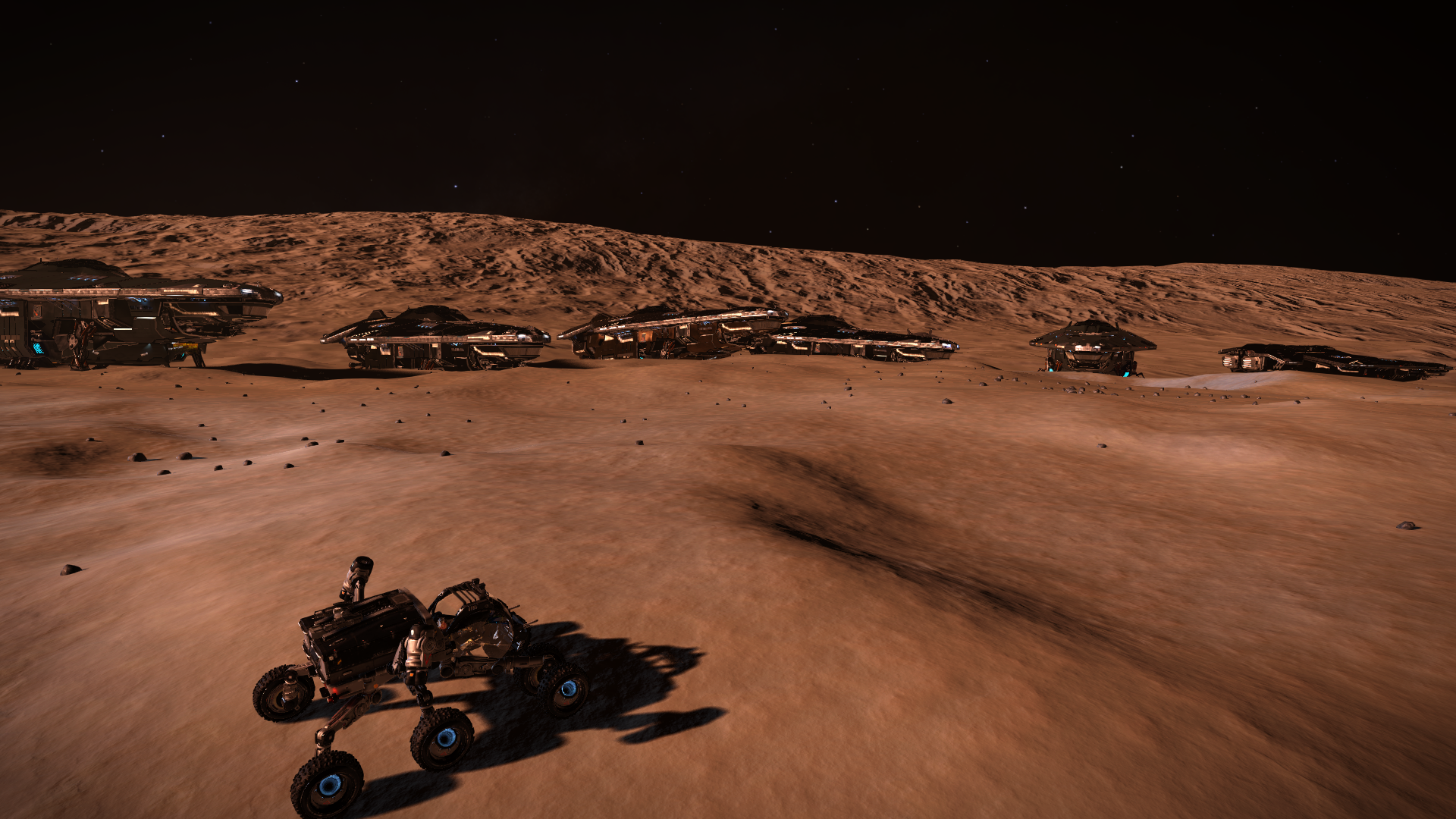 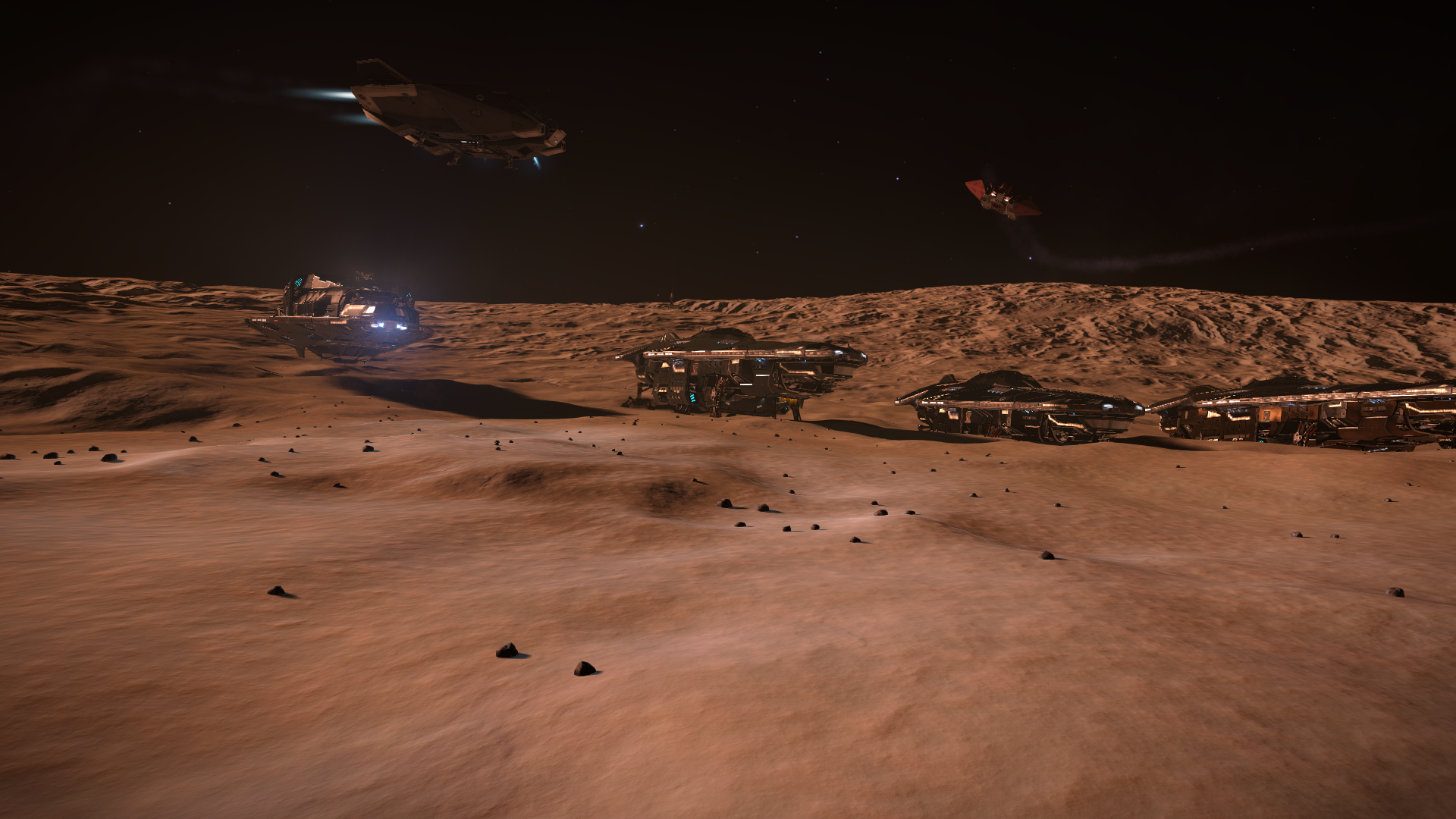 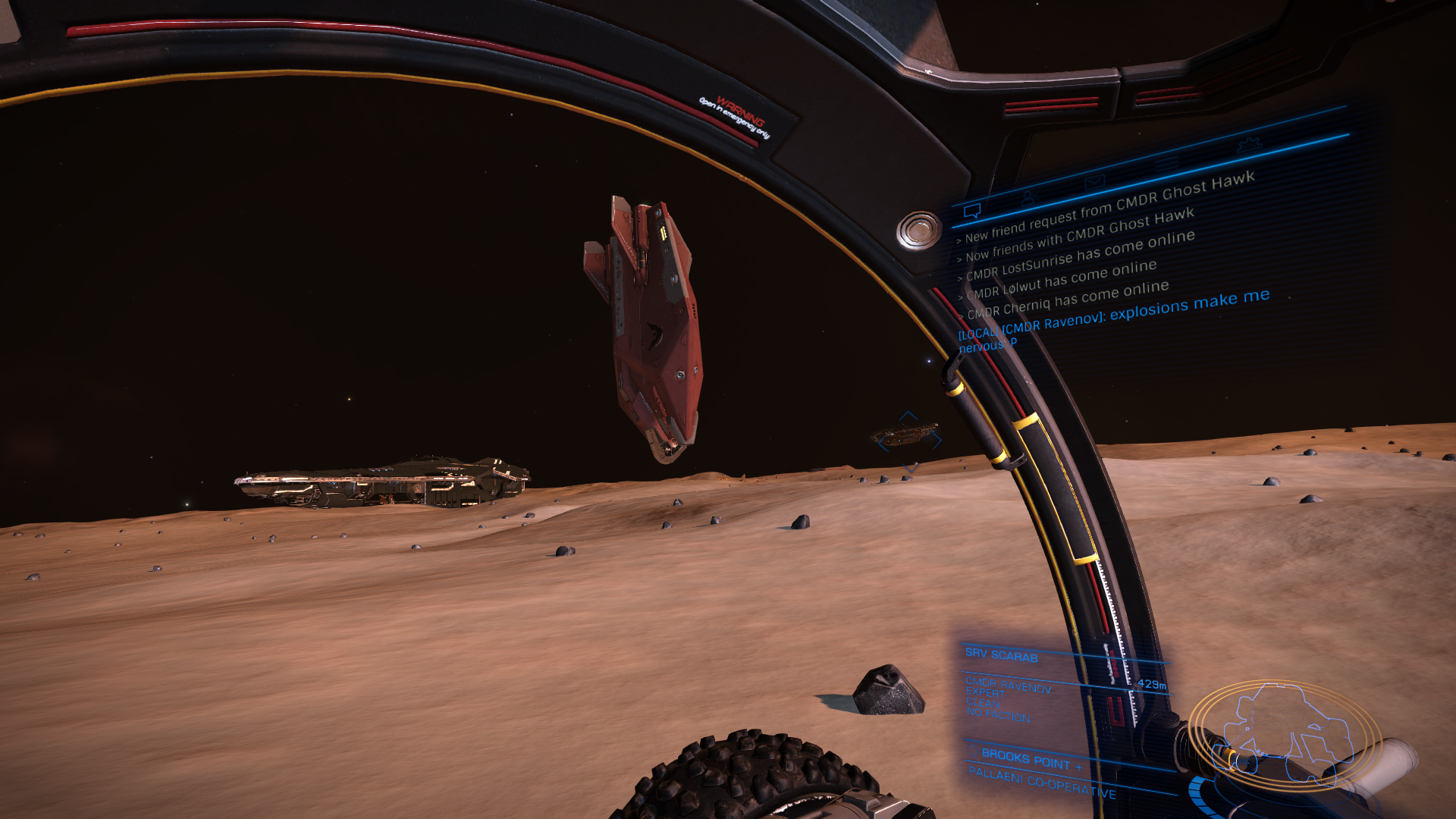 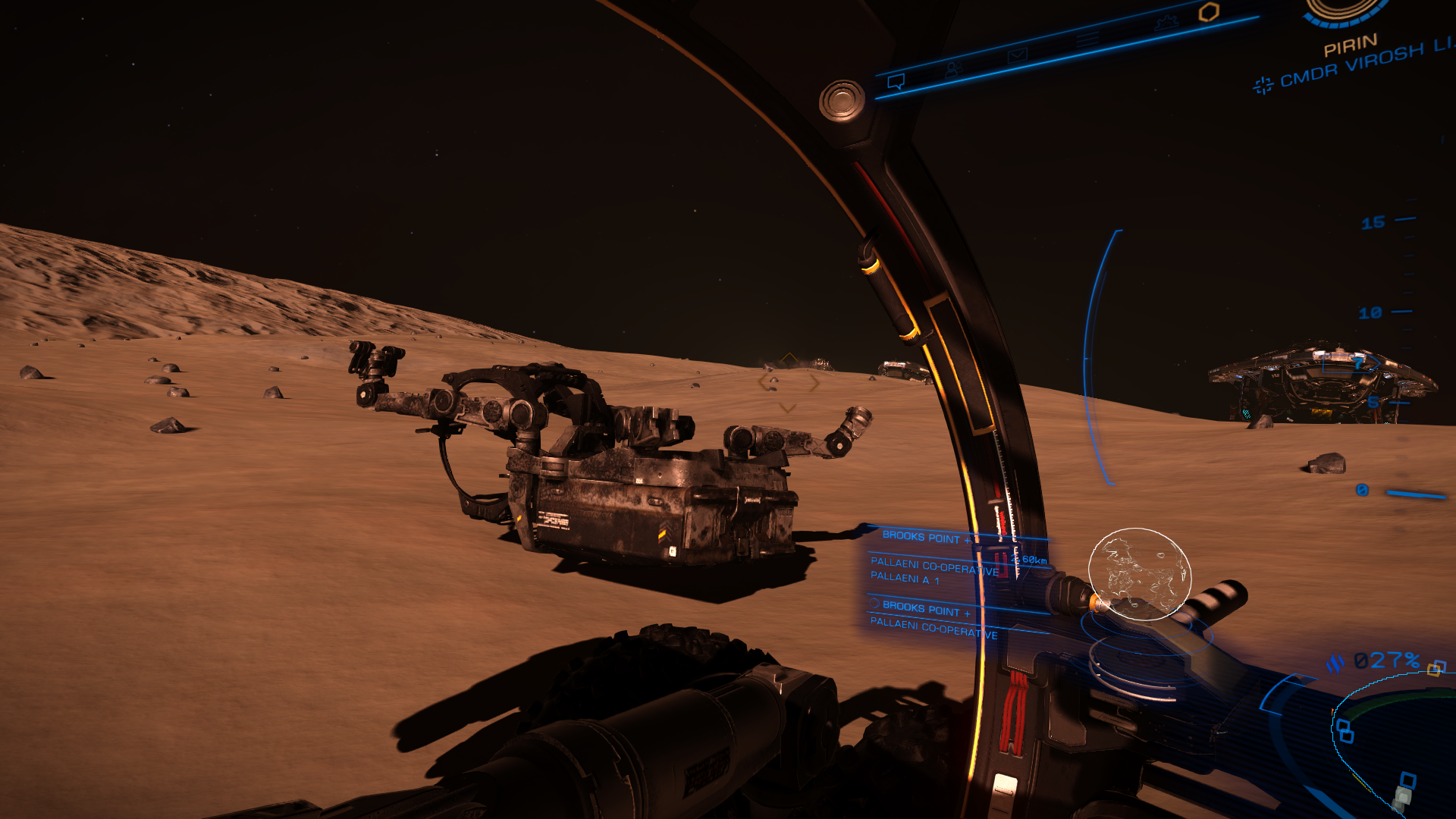 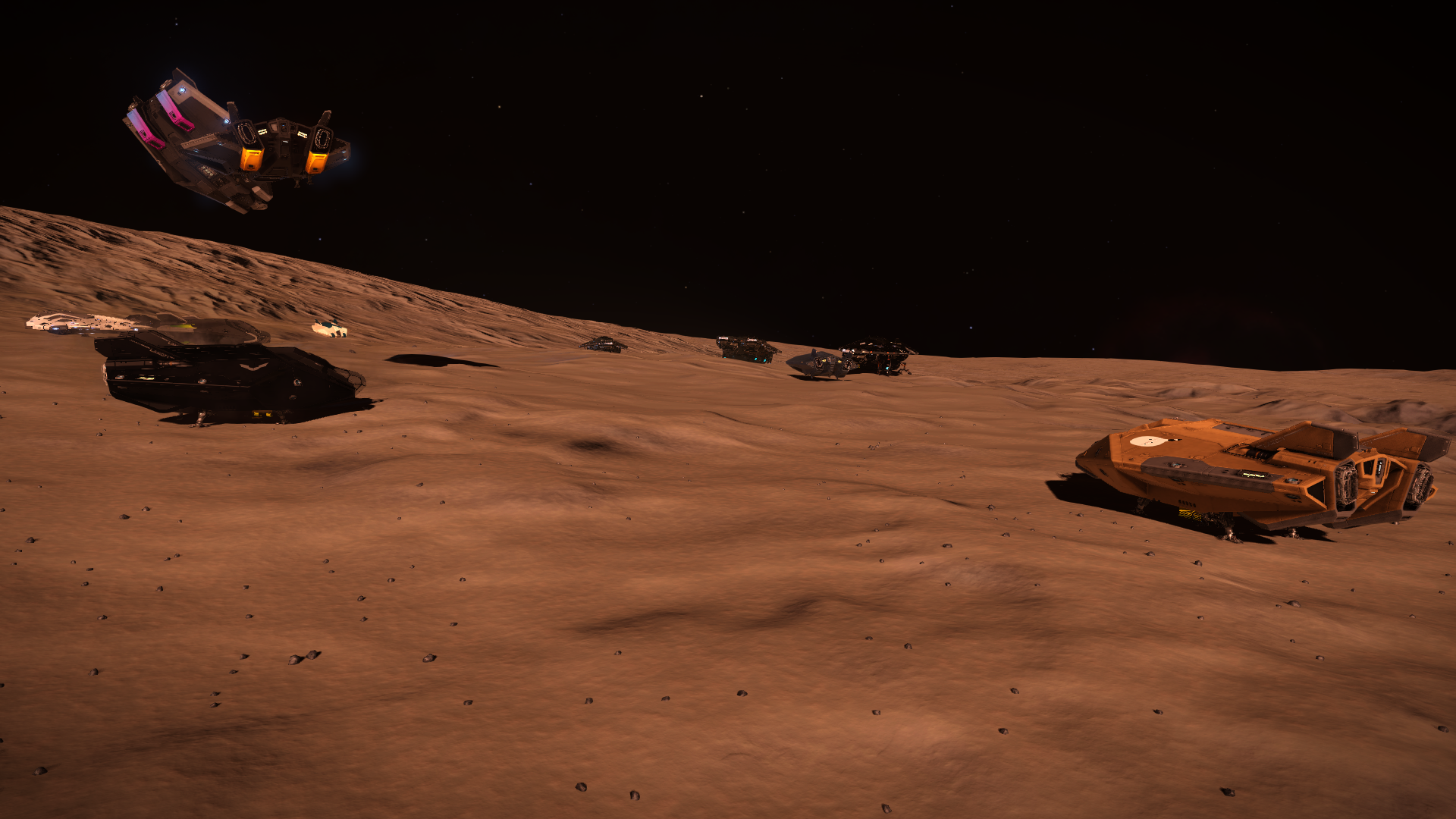 And then everyone launched towards our first waypoint Shapley 1. I must say that seeing so much ships taking off the planet surface, pointing to the stars and leaving at full speed was just breathtaking. I was so busy watching them that i forgot to take a picture...

Anyways, the journey has begun and after hour i was at Fine Ring Sector JH-V C2-4 making my way towards planet A 1 and the Laika's Rest base camp.
Founding the planet and the camp was actually pretty easy since there where so much traffic going on there. I started my descend and started looking around through my canopy and i did not noticed that i was heading towards the surface in a very high speed.
When i actually noticed that it was already too late. My FSD malfunctioned and i was dropped in normal space very hard damaging my ship internals and also loosing few hull plates.
The first few seconds i was speechless going through the system damage reports and then i started cursing. I noticed the damage on the power plant and the missing hull plates. This is not a good thing if you are planning of being out in the dark for a long period of time.
I had to make a decision - do i continue or do i go back and then catch up with the fleet. I choose the later. There was still enough time and if i start traveling with faster pace i will be able to catch up.

So, off to Pratchet's Disc starport we go. The actual system where this station is located is HIP 74290. I decided to go there and not at Pallaeni as it is actually closer to my location. The Pratchet's Disc is located outside of the Bubble and this will shorten my "Be Right Back!" time.
Nothing interesting about the voyage to there, but once i entered the system i made a stupid move of scooping some fuel from the mine star. I forgot that this is habitable system and there are other pilots, some of them does not have any good intentions even if you do not carry any cargo or weapons.
In short - i got interdicted during scooping and i made again a mistake due to my reflexes to try avoid the interdiction.
I faceplanted the star. My FSD malfunctioned once again and i was dropped in the vicinity of the star with some more damage and hull plates flying towards the star surface. The only good thing was that the ship which tried to interdict me was nowhere to be found. The FSD malfunction has probably broke the interdiction link leaving the other pilot thinking where did i vanish all of a sudden. This was actually a good thing as my FSD need plenty of time for cooling down before being useful again. In the meantime i reviewed again the system damage report and disabled some non-critical systems in order to lower the heat my ship was generating. I needed to do this before trying to start the FSD again as i was in the star's corona (which is a hot place), and the FSD generates a lots of heat when started so i need to make sure that i do not overheat during my attempt to escape the star and continue towards the station.
One my FSD was ready i have already disabled almost everything on my ship and i hit the button watching the temperature meter. Managed to start the FSD without taking more damage but i was very close.

There where no more incidents and i have docked successfully at Pratchet's Disc station.
Decided to dump the second Heat Sink launcher i carried. This will raise my jump range with a small amount and since i am going to fly very cautiously and not jumping into any close binary systems i decided that one Heat Sink should be sufficient for my journey. 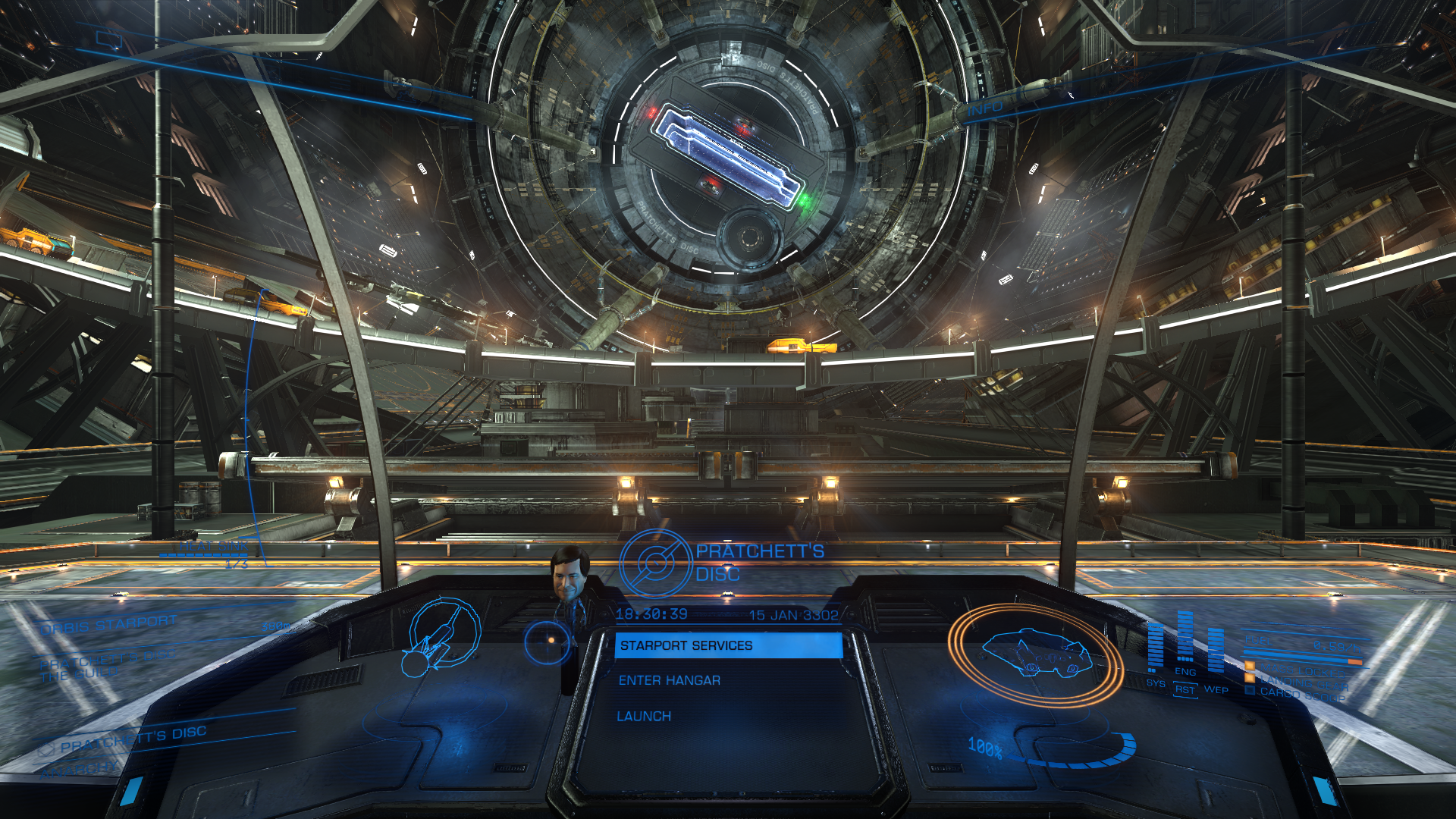 The repairs will took some time so it is time for me to get some rest before venturing out again.

Catching with the fleet Two close calls to death